Some businesses could be forgiven for thinking that Instagram advertising sort of appeared from out of nowhere in the last few years. It seems like only yesterday that its name started to appear in the world of social media as a simple photo-sharing app before being acquired by Facebook and turning into one of the bigger powerhouses in its industry. However, it was actually way back in 2010 that the app first surfaced and 2012 is when Facebook acquired it for a cool $1 Billion. A year later Facebook did what it does best and began to monetise the platform starting with sponsored posts and for advertisers the rest is history.  Hints at the future of social media advertising can be found in other emerging social media platforms like Tik Tok, but the mainstream platforms like Instagram give advertisers the large and diverse audiences they need to deliver for a broad range of businesses and segments regardless of niche. 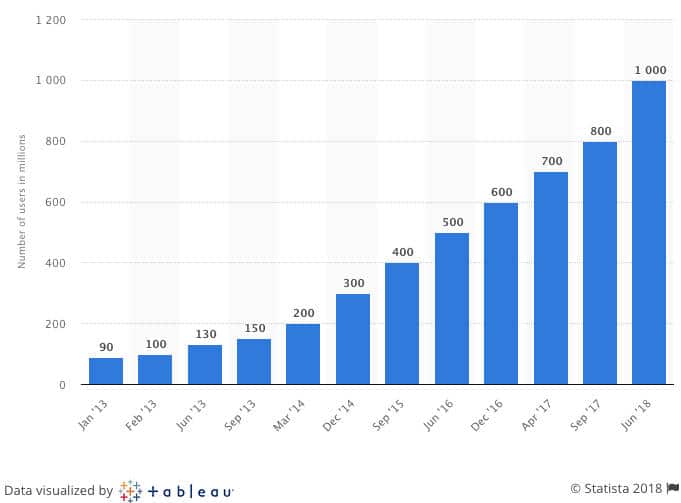 However as far as being an essential part of your online advertising is concerned, this definitely did only become a prominent idea within the last few years as the platform really found its feet in that sense. Now Instagram can boast four times the engagement rate of Facebook when it comes to user interaction with businesses as well as having surpassed over 1 billion active users. So how did this all happen?

“Takeover” makes it sound a little hostile. We’re sure the creators of Instagram were quite happy to become billionaires a mere 2 years after launch (2012) and Facebook have arguably made the platform better since acquiring the company. For Mark Zuckerberg it was a no-brainer. Facebook’s own photo sharing functionality wasn’t seeing the sort of engagement they’d like and this young upstart company’s photo only platform had cracked how to get an audience really invested in sharing only this type of content. Integrating it into Facebook was business gold.

So when did the advertising start?

Facebook wasted no time after the acquisition. It was 2013 when they began to monetise Instagram with a simple sponsored posts feature while also introducing video posts. This allowed businesses to pay for extended reach. The feature wasn’t anywhere near as effective as the current forms of advertising on instagram given that there weren’t options for “shop now” (or “learn more”, etc) buttons and no carousel features (being able to showcase more than one photo or video for a product or service). But it certainly did start to make it clear that there was an audience when engagement went through the roof for these businesses. It also resulted in an increased amount of engagement for Facebook’s photo sharing functionality. At this point, some very important changes started to happen.

As we said, at first the only thing on offer was sponsored posts, however the success of this led to further optimisation of options so that advertising proper could be utilised in a much more effective way. Video ads were rolled out in 2014, Carousel ads and the addition of options for the “shop now” etc functionality in 2015, the new post feed algorithm in 2016 (which despite their official statements on user friendliness related reasoning was definitely also motivated by the increased opportunities for ad placement) and the addition of stories in the same year, which businesses immediately started utilising to sell products even before paid exposure in stories was introduced.

As the story feature rolled out however, there was one glaring omission: Insights. Businesses were not able to get anywhere near the sorts of data they required to be as effective as possible and make better informed decisions. This all changed in January of 2017, when Instagram introduced “Story Insights” and decided to make stories available to all business accounts across the globe along with an “objectives” functionality for this style of advertising much like you’ll see when creating Facebook ads.

They’ve since started to experiment with “Polls” able to be used within stories along with the very new “question” feature, which allows you to ask very specific questions of your audience and engage with them in a much more personal fashion.

Simply put, feature wise this platform is going from strength to strength and while we’d never say that Facebook’s advertising options are objectively bad, this portion of Instagram is definitely much more enjoyable and easy to use.

We’re not going to waste too much time on conjecture, but two things we’re certain will hit Instagram advertising in the near future is increased e-commerce capabilities and a focus on native product listings within Instagram, so let’s break the future Instagram into areas to watch below:

This bleeds into the whole native product listings we just spoke of a lot, but in a general sense we think that it could outperform Facebook’s marketplace in a few important ways. Most notably engagement is something that Instagram seems to have in spades over Facebook (as per the aforementioned quadrupled engagement rates) so not capitalising on this would be a huge oversight. If they manage to nail their e-commerce/shopping section then it will immediately benefit from the ease of use and general favorability amongst users. The trick will be balancing a better e-commerce functionality with better landing pages, but that’s where our other prediction comes in.

Much like Google Shopping or Facebook Marketplace and product listings, a bigger focus on Instagram native product listings (or at the very least improving interfacing between Facebook and Instagram in this sense) would eliminate the problem of low quality landing pages from the equation. Not all businesses can afford the time and/or money to create custom landing pages for all of their online advertising, but doing so ensures a consistent experience that doesn’t result in higher bounce rates or drop offs, so perfecting this within Instagram would eliminate that problem and facilitate better results for all parties involved.

We definitely already covered a lot of this in our previous blog on the topic, so we won’t go into stats again. To sum it up very broadly: If you use Instagram then you’ll no doubt have noticed the uptick in advertising on the platform and there is good reason for this. The increased engagement levels seem to be a result of the softer approach of the platform combined with the fact that it’s not cluttered with endless other functionalities. It’s a simple photo and video sharing app that lends itself well to advertising. It does require a different school of thought when it comes to the ads and creative, but even that part of it is genuinely more enjoyable. So far since acquiring it, Zuckerberg has managed to maintain the feel of Instagram while marrying it into their monetisation efforts. So long as this continues and wasn’t a fluke, then we predict nothing but growth and huge opportunity for businesses and we strongly recommend you explore what it can do for your business!